Jumping into the manuscript for a new novel is always an exciting time—as a writer you’re stepping into a whole new world.  You’re the first visitor to a land that will soon be providing delight and fascination for others—but only if you’re able to keep out of your own way.

I don’t think I’ve ever talked to another writer who feels like they’re the ones “driving the bus” when it comes to writing a story.  More often than not, you’re just sitting by the window watching this new world slide by and doing your best to get it all down before the scenery changes.  Most times, and depending on the complexity of the story, I’m just providing the driver with some vague directions, places of interest and destinations I’d like to get to.  Honestly, writers don’t always get to where we intend to go but good ones always end up where they need to be.  I think that may be the mark of the good writer, like a good journalist, they’re willing to abandon some preconceived notions that once seemed to be key elements and follow the story where it leads.

Every story’s different—sometimes I hop on the story bus with a story concept, sometimes it’s just a scene or dialogue, sometimes I just have the beginning or the ending (rarely both), sometimes just a character (or a relationship between two)… sometimes all I start out with is a title.  The Breadmen of Newcastle!  That one just came to me, had to get it down.  Whatever element it is that I’m starting with, it helps the driver and I discover the tone (and writing style and flavor) of the new land we’re entering; gives us an idea of the kind of characters we might encounter there.

I think the very first character a writer should get to know is this “bus driver.”  Your relationship with the driver can mean the difference between being a good writer and a great writer.  The driver is your collaborator and navigator; literally bringing the story’s elements to you out of thin air. 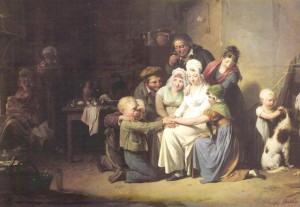 For example: my first impression of what The Breadmen of Newcastle might be is sort of a small town Austenian (Jane-Austeny?) romantic comedy of conversation and errors with a Shakespearian backbone—maybe five poor baker brothers running around confused and in love with five sisters who live with their grumpy old father in a mansion on the hill.  As you can see, the driver is all ready to take me there and shouting out ideas based only on the title I had just come up with. 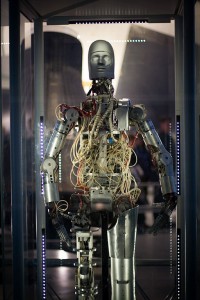 My driver, however, is also a huge sci-fi and fantasy fan.  The bus driver suggested something more along the lines of Blade Runner in The Twilight Zone (Dickian and Serlingian?)—what if the breadmen are all that remains of humanity on Earth; a collection of servant androids that are slowly breaking down, hundreds of years after the last human died?  Maybe two of them become friends and agree to repair and defend each other against the rest of the zombie-like androids whose programing has gone haywire and destructive as they’re wearing down and falling apart.  Maybe while our two heroes are on the run they take shelter in an old underground facility—and maybe it turns out that this facility is filled with forgotten human embryos held in stasis.  Now it’s up to the breadmen whether or not to reboot humanity.  The Breadmen of Newcastle!

So there you have it.  I came up with a title while writing this piece and the driver offered a couple directions to take me in.  Maybe the story lies somewhere in between.  Maybe I’ll take two trips with the driver.  Maybe it’ll end up being about knights fighting cursed baked goods animated by an evil wizard—or stockbrokers who learn they can never recover their lost innocence.  The Breadmen of Newcastle!

Trust the driver to bring you to the story you need—and that there’ll be a fascinating reason the characters are called “breadmen.”

The moral is this; come up with your idea, outline, storyboard, take notes, do research and whatever else will give you the clearest vision of your goal—all of this is important, the clarity of that vision will be the map the driver starts with—but, in the end, never get in your own way.  I think this concept applies to most, if not all, talents and creative skills—art, music… heck, even complex mathematical deductions in astrophysics.  Turn over all the gold you’ve collected and let the driver drive.

If you have a question or comment, leave it below.  Now, I’m going to let these story ideas bake with the driver a little and you stay tuned here for the inevitable appearance(s) of The Breadmen of Newcastle.