Okay, honestly, I was of two opinions going into this one. On the one hand, I really liked the title and the cover seemed interesting—it felt like this could be right up my alley. On the other hand, while I enjoyed the character art inside, my initial reaction to the backgrounds was not favorable—I also wasn’t sure about the very common everyday language these fantastical space fairytale creatures were using. Also, I both enjoyed and hated the idea that there were characters with 90s computer monitors for heads. So I resisted picking this one up for a while, until enough people kept bringing it up in conversation. “I can already tell, you’ll love Saga!” they’d say. 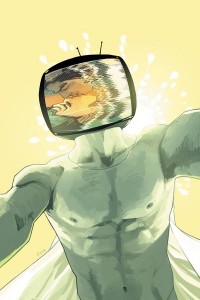 A Screen Head with a Sparse Background

They were right. I was hooked very quickly. All those things I was on the fence about quickly became charming quirks for this tale that tastes uniquely it own. The art is often incredible and fantastic, I quickly found the images as addictive as the story. I can think of no one that I wouldn’t recommend this book to, except the extremely squeamish (my sister is one such—and the book does open with a haphazard and fairly honest birth scene—plus she wouldn’t like the often graphic graphic art and language peppered throughout).

Taking into account that its presentation is that of an over-the-top space-opera/fantasy, the characters are extremely well developed and realistic. The struggles, obstacles, and issues raised feel relevant and offer lucid commentary—just what you’d expect from Brian K. Vaughan (who I’m beginning to believe can do no wrong). Although I’m no longer bothered by the sparse simplistic backgrounds in some of the panel illustrations because it’s made up for with the style and care that goes into the character art, that sparseness is one of the only critiques I can think to bring up. The guys with computer heads still unsettle me greatly, but I believe that is the intention.

Near the end of this volume I was beginning to feel like any time spent not reading this was time wasted. I bought the next volume right away, to ensure I wouldn’t have to go a day without these characters and their adventures seeping into my eye holes.

View all my reviews