Chums! The Thanksgiving week has turned out to be a big hit for fansters with the release of trailers for two highly anticipated film sequels; Star Wars VII: The Force Awakens and Jurassic World (essentially Jurassic Park 4)! These are a couple great examples of where sequels are welcome from Hollywood.

Too many times we hear the public cry bemoaning the lack of originality when it comes to Hollywood’s penchant for resurrecting tired old material—and it’s a legitimate cry. Hollywood seems too often to be leaning on safe choices, material that comes pre-baked with the hope of built in audiences—reheat and serve. When it’s done well and with love, we’re lucky enough to end up with an X-Men: First Class or Terminator 2: Judgment Day. When it’s done solely to make a buck, we end up with Speed Racer, Batman & Robin, Son of the Mask, Jonah Hex, Green Lantern…

Judging just by the these new trailers, these are two sequels made with love—at least the guys cutting the trailers put a lot of love into them. These are also lushly built worlds full of room for expansion and that’s the key for a successful franchise. Whether it’s the story, character(s) or world, each successive entry needs to plumb deeper and explore farther. It also requires the creators knowing how to walk the line. The audience needs to learn more but they shouldn’t be too overwhelmed either, creators shouldn’t overlook the nooks and crannies in order to shove an entire universe in our faces—I think this was the big issue with the Star Wars prequels—getting to know the characters was sacrificed in service of a fictional education in galactic trade regulations, alien politics and the geography of an expanding number of planets to visit (which looked neat!). Too much exposition, not enough genuine dialogue. 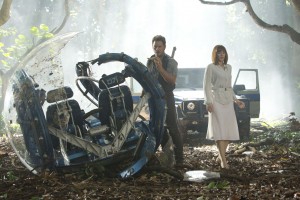 Now that the Jurassic Park has become a world and we’re returning to visit a galaxy far far away as it continues to develop and expand, it looks like those at work on them are ready to take us farther indeed—and judging by those at the helm, they won’t be forgetting the humanity as they do.

Jurassic World, directed by Colin Trevorrow, should be a very interesting entry. Trevorrow’s debut film, Safety Not Guaranteed, was a chewy little character piece created by a clear lover of sci-fi working with a tiny budget. Overlord, Executive Producer, Steven Spielberg should keep scope and scale in check for this up and coming filmmaker on his out-of-the-gate first mega-budget action sci-fi thriller. Actors truly adept at portraying layered characters should help make his job that much easier—including Chris Pratt, Bryce Dallas Howard, Jake Johnson and Judy Greer, just to name a few. 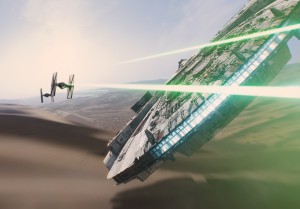 The Millennium Falcon facing off against TIE Fighters in Star Wars VII: The Force Awakens

Star Wars VII: The Force Awakens is being born of a new universe, so to speak; it’s the first entry of the series since Disney’s acquisition of the franchise along with the rest of Lucasfilm. Personally, given the recent track record with Marvel properties, I think it’s in good hands. Director J.J. Abrams wisely brought back so much of the talent that helped create the magic of episodes IV-VI. I used to feel a little gun-shy of J.J. until he worked with Spielberg (producing) on Super 8. In my opinion, he learned the biggest lessons he needed at that point to become a really strong storyteller. He used to come up with excellent concepts and scenarios to make stories compelling but didn’t seem to be able to end things properly. Now it seems his structure is complete with his latest projects. We may feel a bit rebuffed by some of the elements of his Star Trek: Into Darkness but it’s still a solid framework and complete story, providing engaging fascination and characters. I’m sure some may find bones to pick with The Force Awakens but I feel confident that, overall, it’ll be supremely entertaining and finally wash the bad taste of those prequels away.

Enjoy!—and let us know what you think in the comments section below.