When Ellen DeGeneres commented on Meryl Streep’s record breaking 18 Academy Award nominations, she decided that they should break another record—for the “most retweeted photo of all time.”  Her picture with Meryl quickly grew in scope as she waved other guests and nominees at the live Oscar broadcast into the shot.  When she started having trouble trying to fit everyone in, it was Bradley Cooper to the rescue, taking the camera phone and stretching his arms as far as they would go in front of the television audience.  A real “Hollywood family” moment.

Viewer’s were quick to answer record challenge and just as quickly many retwitters ran into this: 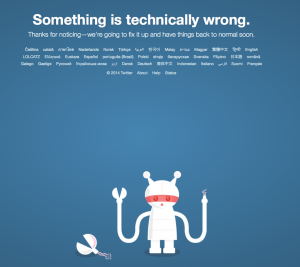 “We crashed and broke Twitter,” DeGeneres announced during the broadcast. “We made history.”

And the history making continues—at the time of this writing, reports have the record breaking retweets passing 2.2 million.  My personal shout-out to Kevin Spacey—that is how you pop up in a photo!

Check out the original tweet yourself and be part of the record breaking madcap retweetery:

If only Bradley’s arm was longer. Best photo ever. #oscars pic.twitter.com/C9U5NOtGap